A basic guide to using smart motorways in the UK

A basic guide to using smart motorways in the UK

Smart motorways are the latest initiative being implemented by Highways England in a bid to tackle road congestion.

Congestion on the motorways and major road networks in England costs an estimated £2 billion every years, with 25 per cent of which is caused by road traffic accidents. The smart motorways initiative has been conceived in order to ease congestion, which in turn will help create economic benefits for the region and the UK as a whole.

So what are smart motorways?

A smart motorway is a section of a motorway that deploys traffic management methods to increase capacity and reduce congestion in particularly busy areas. These methods include using the hard shoulder as a running lane and using variable speed limits to better manage the flow of traffic through congested areas. This also minimises the risk of accidents, which may then bring the area to a complete stand still.

Highways England (previously the Highways Agency) developed smart motorways to manage traffic in a way that minimises environmental impact, as well as reducing costs, as they negate the need to spend on construction to widen the motorway to accommodate the need to build additional lanes.

There are currently three types of scheme which are classed as smart motorways.

This initiative is as simple as it sounds. Under all lane running schemes, lane one (formerly used solely as the hard shoulder) is only closed to traffic via overhead and verge mounted cantilever signs, in the event of an incident. On these sections broken white lines between all lanes indicates that each lane has the same status.

Should an incident occur in lane one (the hard shoulder) a red cross (X) symbol will be clearly displayed on the overhead gantry signs to indicate to motorists the lane has been closed due to traffic.

Driving in a lane where the red X symbol is being shown, is illegal, and could lead you to being prosecuted. CCTV will be extensively used to monitor traffic and catch any drivers who break the law.

Controlled motorways will be defined by three or more lanes with varying speed limits. The hard shoulder will remain unused, unless in the case of a genuine emergency.

This initiative involves opening the hard shoulder as a running lane to traffic at busy periods to ease congestion.

Between these stretches a solid white line differentiates the hard shoulder from the normal carriageway. Like on all running lane motorway stretches, signs on gantries overhead will indicate whether or not the hard shoulder is open to traffic.

The overhead gantry will also display the mandatory speed limit which can vary according to the traffic conditions. Speed cameras are used to enforce the variable speed limits.

Will there be more speed cameras on smart motorways?

All mounted overhead gantries on smart motorways now include speed cameras, designed to catch drivers straying over the speed limit.

The AA estimates that a record 7,000 cameras are now installed on motorways, A-roads and in built-up areas.

Those who break the speed limit face a £100 fine and three penalty points on their licence. 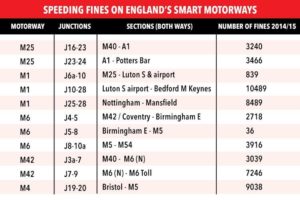 Photo courtesy of The Sun

DVSA gets tough on HGV Drivers who exceed their hours limit

The Driver and Vehicle Standards Agency has recently announced it is going to impose heavier sanctions on HGV drivers that exceed their hours limit.

Is the pay-per-mile scheme fair on transport companies?

The UK Government is currently consider whether to introducte a pay-per-mile scheme for heavy goods vehicles when using British roads.