Rushcliffe Borough Council and partners marked the official opening of fifteen new employment units at Colliers Business Park on Colliers Way in Cotgrave. Route4 Solutions is delighted to say that we are to be one of the new occupants of the units and work is currently being done to fit-out the offices and create warehouse and storage space to support the courier business. 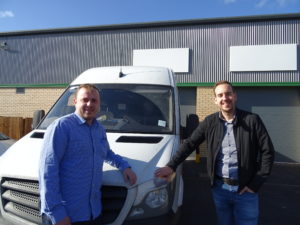 Owen and Chris outside the new unit which is currently being fitted out and awaiting external signage.

This development is part of the wider regeneration of Cotgrave and was made possible with the help of Growth Deal Funding from D2N2 LEP which was secured by Rushcliffe Borough Council in 2015.

The wider regeneration of Cotgrave includes the construction of 470 new homes on the former colliery site along with extensive improvements to the town centre, all of which is well under way.

An event was held on Tuesday 18 October to officially open the Business Park which was attended by businesses and council officials. Owen Harris and Chris Lawlor attended on behalf of Route4 Solutions. 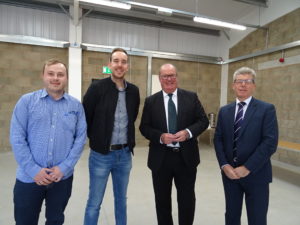 Owen Harris and Chris Lawlor with Rushcliffe Borough Councillors at the official opening.

Commenting, Mike Harris, said, “Having taken space at NSEC, we very quickly realised that we need more than just office space so looked around for good quality commercial units from which the HGV driver recruitment business and the courier business could operate. The facilities at Colliers Business Park were perfect and we look forward to moving in as soon as possible.”

Before the units had been completed, 10 units had already been let demonstrating the attractiveness of the location, the quality of the units and the demand in the area. Joining Route4 Solutions leasing units  on site include a distributor for shopping trolleys and casters, a window cleaning franchise, an internet bra sales, embroidery design studios and workshop, and a home improvements firm.